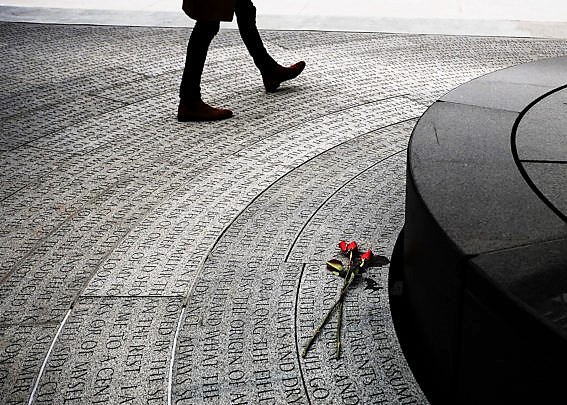 Who would go into the heart of darkness where your loved ones lie? A memorial honoring victims of the AIDS epidemic, near the former St. Vincent’s Hospital site in New York, where many early victims of AIDS were diagnosed. Spencer Platt / Getty Images

HIV/AIDS doesn’t make the headlines these days as it once did. It has largely slipped under the radar because medically, the disease is now managed successfully.

But in 1993, in the middle of the AIDS epidemic, medication wasn’t available and people everywhere were terrified of being overrun by the virus, like a mysterious octopus associated with gay people. That was when South African photographer Gideon Mendel went to London and asked to enter a ward treating desperately ill AIDS patients and take pictures of them. Most were young gay men.

Of course the hospital said no, but after reassurances about sensitivity and confidentiality, and explicit consent from the patients, permission was granted. Mendel said it was to help combat the stigma against them. He was allowed by Middlesex to go into the wards of four dying AIDS patients – John, Ian, Steven and Andre – and photograph their treatment and ward life, including the intimate way their partners, staff, patients and families related to each other. They died soon after the pictures were taken, just before medication became available.

Being gay was still frowned on in many places, and aside from the lack of successful medical care, the AIDS stigma was gigantic. Nurses treating patients didn’t tell their own families; AIDS wards in hospitals were hidden; even the plaque marking the opening of the AIDS ward at Middlesex by Princess Diana was covered by a painting. In an attempt to penetrate the wall of silence, in the United States in 1987 a gigantic AIDS Quilt was shown on the National Mall in Washington DC, created from panels with names of people who had died of AIDS. Many funeral homes refused to handle their remains.

Now, 25 years later, Mendel has assembled a poignant collection of those photographs in a book called The Ward. Its cover picture shows a grief-stricken, healthy man draping himself over and kissing the lips of his sick male friend lying in a hospital bed. You can tell from their body language that they had once had a joyful, loving life together. It is heartbreaking.

Attitudes have changed and the furor seems alien now, with anti-retrovirals allowing HIV-positive people to live full, healthy lives. But in 1993 it took nerve to do what Mendel did.

What’s the lesson for today? The AIDS denialism of those days is similar in its impact to today’s climate change denialism. Leaders of the most powerful countries – such as US President Donald Trump and leaders in India and China – continue behaving as if there’s lots of time, while the earth shakes. Our future is bleak unless major action is taken on climate change very urgently. Already the seas are warming and the icecaps are melting, and scientists hope we can limit the rise in global temperature to only 1.5 degrees, rather than the 2 degrees which would eventually kill us all. Global greenhouse gas emissions must be at zero by mid-century.

We need climate change activists of the sort who tackled AIDS, or most of the planet’s civilisations are doomed, and the Gideon Mendels of the future will come and photograph the ruins.

GEOFF SIFRIN is a journalist in Johannesburg, South Africa, and former Editor of the SA Jewish Report. Email:  geoffs@icon.co.za

We say we educate our children, but what chance does a child have with a mud hut for a school and no teachers? In the photograph, a child walks to school in June 2013 in a village outside the town of Mthatha in South Africa’s Eastern Cape province. Photo: AFP/Jennifer Bruce

THE CHILDREN of South Africa have been betrayed by the education system. And the clamour to enter universities has given them a false sense of a passport to a better life. But it isn’t, given the declining state of our universities, and the abysmal matric system which sent them there.

Now, in an unbelievable move, the minister of Higher Education and Training, Naledi Pandor, has lowered the minimum admission requirement for a Bachelor’s degree at a university to a matric which includes attaining only 30% in the language of learning and teaching of the university they’re applying for – which is mostly English – among other very low requirements. Yes, 30% for matric English is now enough to get a university-entrance matric! The implications are heartbreaking.

The overwhelming feeling among academics at South African universities is despair about the direction in which they are going, including the formerly best, such as Wits. A huge percentage of students coming in today have little adequacy in intellectual and analytic abilities. In addition, lecturers report that it is established practice by many universities to artificially boost their numbers by condoning passes. Remember the era when to get a university degree was a prized, difficult achievement? Wits also once brimmed with Jewish students and faculty, who worked hard to get their degrees, but came from a rigorous basic education, not only from the private schools. Now it has few Jewish students.

With such low competence levels because of appalling basic education, students simply cannot cope with a university environment. Jonathan Jansen, distinguished professor in the Education Faculty at Stellenbosch University, calls the 2017 matric results, which government touts as an improvement, a “disgraceful freak show”.

To believe that the 2017 matric pass rate is 75.1%, about 2.5% higher than in 2016, is asking, says Jansen, “that you forego common sense”. Some 78% of children in Grade 4 cannot read with understanding, a finding Jansen cites that placed SA last among 50 countries with which it was compared; 9% of Grade 6 teachers cannot pass a Grade 6 maths test. Actually, the rot has set in from Grade 1.

“It is not as if the few who passed and even those who graduated with a so-called Bachelor’s pass have a solid academic education to see them through tertiary studies” he says. The quality of the matric examination is “so weak in the intellectual demands made of pupils that any fool can scale the 30% passing hurdle.” Most will drop out.

Flip Smit, former vice chancellor of the University of Pretoria, says the move by Pandor to lower university entrance requirements is reckless. Universities already receive between five and nine times more applications than they can accommodate. The new rules will make it far easier to get a matric Bachelor’s pass, and open flood gates for additional applications. And the ease of achieving a matric pass misleads learners into thinking they can complete a degree course.

Jansen says this government and its basic education department “are a disgrace to the nation. They have failed our children, mainly black and poor learners stuck in dysfunctional schools.”

You, who are reading this column, might be an alumnus of a South African university. But what does this mean for your children and those of other middle class South Africans, white and black, including the Jewish community, who were able to send their children to quality private schools where they received a good education? Less and less will send their youngsters to SA universities, rather they will send them overseas. And when you have studied overseas, you are unlikely to come back.

GEOFF SIFRIN is a journalist in Johannesburg, South Africa, and former Editor of the SA Jewish Report. Email:  geoffs@icon.co.za