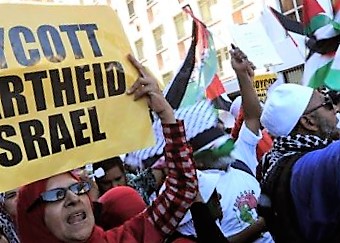 Does the SA government agree with the placards? Protesters take part in a march to parliament in Cape Town, May 15, 2018, to protest the use of deadly force by Israeli troops against Palestinians at the Gaza border. The SA government has recalled its ambassador to Israel, saying “he will not be replaced”

THE ANC-led government does not kowtow to Jewish interests nearly as much as SA governments once did, particularly in relation to Israel. Jews remember nostalgically when former SA President Nelson Mandela visited Israel in 1999 after retiring as the first democratically elected president, and called out to chief rabbi Cyril Harris at his hotel in Jerusalem: “My rabbi is here, now I feel at home in Jerusalem!”

Could President Cyril Ramaphosa do the same? With his slim hold on power, it would be impossible in today’s anti-Israel climate among South Africa’s body politic, even if he personally has a good relationship with the Jewish community and might otherwise be willing. Other factions in the ANC, and more radical parties would immediately make political capital out of it to use against him.

Mandela was already out of office, but nevertheless had the clout to visit, despite the politics. Jerusalem carries huge significance for Jews, particularly the Kotel, but to Muslims Jewish control of it is anathema.

Nothing in politics is fixed forever, there are too many variables. In South Africa, minority groups such as the Jewish community who once held major sway in government and elsewhere are experiencing significant contractions in how they are perceived and treated, although Jews still wield economic influence through business and major corporates.

The growing Muslim interests are becoming more important to the SA government than they were before. As this shrinking SA Jewish community, once a jewel of the Jewish world, loses its influence and its confidence, it’s a painful reality for Jews to accept, and they need to guard against too much pessimism. But it is better to look this scenario straight in the eye, to re-format the community’s understanding of itself, where its strengths lie and its new place in this evolving new country, rather than deny it and hanker after the ‘good old days’. Even if some of the best of the Jewish community in all fields – business, the arts, and others – have left for safer shores, the basis on which they grew up here is strong enough to re-invigorate itself.

It will not be easy. The Jewish presence in SA society is sparser than ever; many South Africans, such as those in rural schools, grow up and live without ever encountering a Jew and are left only with stereotypes that they hear or read about.

The latest blow to this Zionistic community which indicates political realignment is the government’s decision to permanently recall the South African ambassador, Sisa Ngombane from Israel. The ambassador was withdrawn in May 2018, in line with an ANC resolution at its 2017 elective conference, following the killings of protesting Palestinians by the Israeli army in Gaza. International Relations Minister Lindiwe Sisulu declared last week that the ambassador “…will not be replaced.”

The decision is simple-minded. And coming just before the elections, it smells of cheap electioneering by the ANC to appease the dogs snapping at its heels – the EFF and others. Even many Israelis and Jews who object to policies of the Israeli government feel this way.

It has a sadder tone for South Africa than Israel. Many South Africans still bask in the glory of the Mandela years. It’s a bitter pill to swallow that those years are gone, as this country drowns in bad government and has difficulty keeping the lights on.

For most world citizens, South Africa is just a dot on the map. As politics shifts, SA Jews and the ANC need to be more agile to balance. It would be better to increase interaction with Israel rather than reduce it.