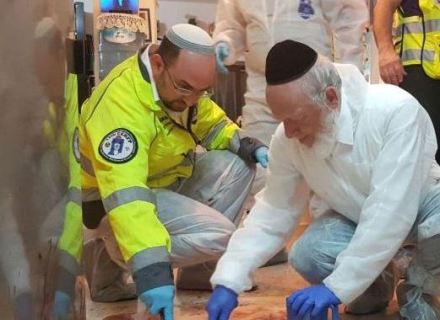 When to show blood on the floor? Israeli officials examine the murder scene of members of the Salomon family in Halamish by a knife-wielding Palestinian. Controversy abounds about whether publishing pictures of the edge-to-edge blood-soaked floor by the IDF violates victims’ dignity (photo: ZAKA)

WHAT’S in a picture? The violence at Jerusalem’s Temple Mount and the terrorist attack in the West Bank settlement Halamish on Friday raises questions about how much blood and gore should the general public see through photographs when civilians are killed.

The morning after the Halamish attack, in which Yosef Salomon and his two adult children were stabbed to death by a Palestinian with a knife during Shabbat dinner, the IDF released photographs of their kitchen floor, drenched edge to edge in thick blood. Another picture showed the attacker lying face down on the bloody floor.

An Israeli official posted it on Twitter, captioned, “This is the terrorist lying on the floor… full of the blood of three innocent family members…”

Arguments for and against such pictures’ release are many-sided. In this case, there was some discomfort in official circles and among ordinary Israelis.

A major humanitarian consideration is preserving the dignity and privacy of victims and family. From a policy viewpoint, Israel also wants to avoid creating an image of Israelis and Jews as “victims.” An Israeli official quoted this week in a national paper referred to the famous Holocaust-era Warsaw Ghetto photograph of a Jewish boy with his hands up, watched by a German soldier: “[Pictures of Jews being humiliated] makes our enemies happy, and demoralises us.”

People arguing that such pictures evoke sympathy for Israel and discredit the terrorists’ cause are only partially correct, since a myriad pictures are also published by Palestinians of their victims of Israeli attacks; it depends who is seeing them, and from what perspective. For some, the attackers are terrorists; for others, heroic martyrs.

Dramatic war photographs have sometimes had major effects on public perception of a conflict. Think of the famous Pulitzer Prize-winning picture of a nine-year-old Vietnamese girl running naked and screaming down a road in June 1972 after being burned by a South Vietnamese napalm attack during the Vietnam War. The war’s moral imperative was never the same after that. Or the picture in September 2015 of a three year-old Syrian boy’s miserable body washed up on a Turkish beach, becoming a symbol of the refugee crisis and the world’s ignoring of Syrian atrocities in which 400 000 have died in the six-year war, many of them civilians. The photograph went viral, shifting some attitudes towards migrants.

In South Africa, the image during the 1976 Soweto uprising by photojournalist Sam Nzima of the dying, bloodied 13-year-old Hector Pieterson shot by apartheid security forces, was published worldwide and became an emblem of the anti-apartheid struggle. Later, South Africa’s social problems shot to the headlines in May 2008 through the image of 35-year-old Mozambican Ernesto Alfabeto Nhamuave being set on fire in a village street during xenophobic attacks on foreigners by locals, causing an uproar about the society’s moral values.

After a terrorist attack in Israel, the IDF is often in charge of the site, with a say on what images are released. But it cannot control photojournalists working for global media, or civilians’ pictures taken on smartphones and tweeted out to the world.

Newspaper editors are themselves caught in a dilemma. They cannot publish only sanitised images giving no sense of the horror. Yet they cannot fill their pages with gory pictures which will make readers recoil. The balance is difficult to find.

In the Halamish case, the IDF had control of the scene, which was in a fenced-off West Bank settlement. Arguably, the violation of the family’s dignity with images of the Salomons’ bloody kitchen floor, could have outweighed any positive result of their publication. Yet, in the emotions of the moment, one can also understand the rage which led to the opposite decision.

(GEOFF SIFRIN is a journalist in Johannesburg, South Africa, and former Editor of the SA Jewish Report. Email:  geoffs@icon.co.za ) 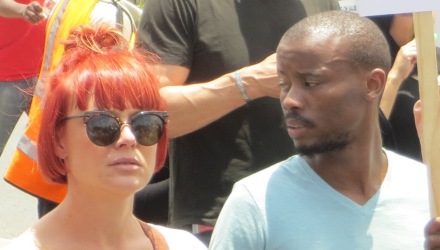 Black and white South Africans are still like two strangers getting to know each other, as a racial furore on social media showed this week

THE social media uproar over ugly racist postings which erupted this week shows how far South Africans still are from genuine reconciliation. It started when a white estate agent in Durban compared the thousands of black New Year’s Day swimmers at the city’s beachfront to naughty “monkeys” who left tons of litter behind them, evoking instant nationwide condemnation. She said in an interview afterwards that she was puzzled at the reaction, and was not being racist, but “factual”.

Then, a high-ranking white economist at Standard Bank tweeted: “More than 25 years after apartheid ended, the victims are increasing along with a sense of entitlement and hatred towards minorities…”. This too, was interpreted as a racial slur, leading the bank to suspend him in deference to their black clients. He apologised, saying he never intended causing offense.

Whites and blacks are still blithely insensitive to what presses each others’ buttons, despite the idealistic “rainbow nation” ethos which Mandela promoted and which is now regarded with some cynicism. In certain respects, things are moving in the opposite direction, towards further racial polarisation.

Whites complain about black hypersensitivity and the demand for excessive “political correctness”, which prevents them calling a spade a spade. For example when they make legitimate arguments about the problems of the country – like President Jacob Zuma’s dismal performance – and are then accused of racism instead of being heard for the point they are making. One black blogger on Monday retorted that there is “some stuff that white people just don’t get”.

For example, a cartoon in June last year about the president by much-loved white cartoonist Zapiro evoked unexpected reaction from blacks. Zuma had used his authority to allow Sudanese President Omar al-Bashir – who is wanted by the ICC for crimes against humanity – to visit South Africa illegally, but had previously denied entry to the peace-oriented Dalai Lama. Zapiro’s cartoon showed the president trying to read Tolstoy’s book “War and Peace” upsidedown as if he didn’t understand the difference.

Some people responded indignantly to the cartoon, believing this amounted to whites smirking over Zuma’s lack of a proper school education – one reprehensible aspect of apartheid was its denial of good education for blacks. Many still see Zuma – corrupt and inept as he is – as representing the heroic, dogged African triumph over white racism; despite the odds, he succeeded in beating the system and achieving the highest positions in the ANC and as SA president.

Anything positive said about apartheid leaders provokes outrage, even if it comes from fervent opponents of the system. Last year, veteran journalist and former editor of the anti-apartheid Rand Daily Mail, Allister Sparks, caused a Twitter storm for calling apartheid Prime Minster Hendrik Verwoerd one of the many “smart” politicians he had met during his 64-year career. Sparks had fought fearlessly against Verwoerd’s monstrous policies, but concedes that he was an able politician and built the National Party very effectively. He responded to the furore by saying: “What am I supposed to do? Am I supposed to say he was dumb or stupid? He wasn’t stupid.” He eventually publicly apologised, however, for causing offense.

Racial sensitivities lie in tiny details as much as big issues. People’s names, for example, are precious things to them, yet most South African whites are still unable to pronounce African indigenous names properly, particularly ones that contain unfamiliar tongue-clicks or combinations of consonants. Indeed, most whites still cannot speak any African tongue – the country has 11 official languages. A new, popular hashtag aimed at giving whites a taste of their own medicine is called #TheYearWeMispronounceBack, in which the tweeters purposely mispronounce English names. Flippant as it may seem, the campaign represents a genuine undercurrent of resentment with a long history.

During apartheid, white employers generally called their black workers by “European” names, like “John” or “Elizabeth”, not their real African ones. Even today, when going into a restaurant or other public place where black waiters wear a name tag, white patrons will happily call them by this if it is European. But when the name is an indigenous African one, they will often not use it out of embarrassment at not knowing the correct pronunciation.

The conundrum of racial tensions, in all its myriad details, will be with us for a long time to come. It’s like two strangers getting to know each other. Social media will not solve the problem. But tucked in amongst the mutual recriminations on facebook and Twitter are important truths. South Africans need to listen carefully.

(Geoff Sifrin is a journalist and author based in Johannesburg, South Africa. He was Editor of the SA Jewish Report for 16 years, from 1999-2014)